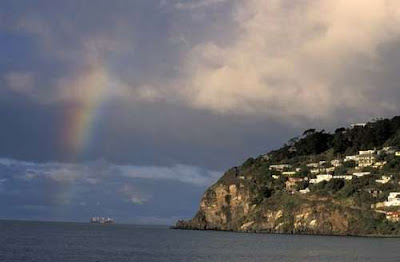 Photo by Christian Heeb and found at totaltravel.co.nz

I lived in Christchurch until I was married and moved to the North Island, and later from there to Australia in 1977.

This photo of the beachside town of Sumner shows, at sea level a large volcanic rock called Shag Rock where my mother would take us occasionally, in school holidays, for a day's outing.
Sumner is at the Northern edge of Bank's Peninsula about eight miles from the city centre.

If you look closely (or enlarge the photo by clicking) you will see two brown houses at the left of the first tier of homes. It was in the top brown house that I lived whilst studying at Christchurch Teachers' College and the University of Canterbury.


I will take my mother for a drive out to Sumner when I am in Christchurch because she lived there as a child and grew up there, and has many happy stories to tell from that time.