This great shot of repairs being undertaken on the space station over the South Island of New Zealand show Banks Peninsula in the bottom left corner.

Banks Peninsula was named after the botanist, Joseph Banks, on Captain James Cook's ship The Endeavour on its voyage to the great southern lands in 1769-70. 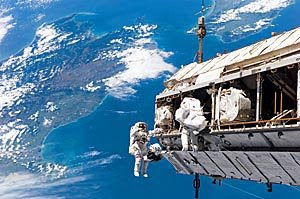 The city of Christchurch lies between the Waimakariri River
(famous for jet boating) in the North and Banks Peninsula in the South. 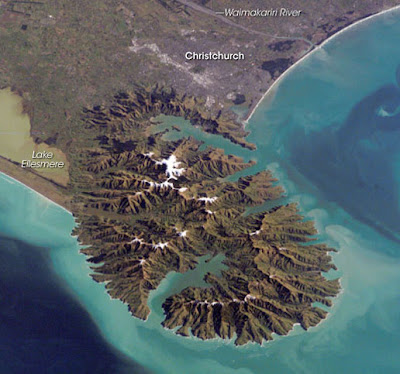 The major inlet at the top of Banks Peninsula is Lyttleton Harbour.
The early settlers, the Pilgrims, arrived in Lyttleton and climbed over the hills
to the Canterbury Plains with their belongings. The heavier luggage was taken
by small boat around to the estuary and floated up the Avon River.

The track they walked is called the Bridle Path and it is a formidable climb.
In addition they were dressed for an English winter,
no-one had told them to expect a warmer climate.

A tunnel through the Port Hills was built when I was a child.