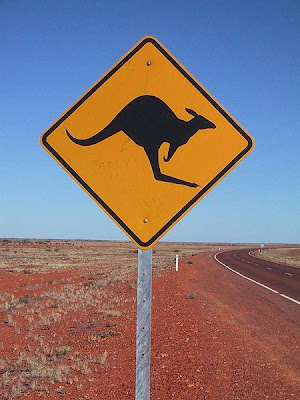 
Males are called bucks, jacks or boomers, while females are named does, jills or flyers.

Babies are referred to as joeys.

A group of kangaroos is called a mob, a troop or a court. 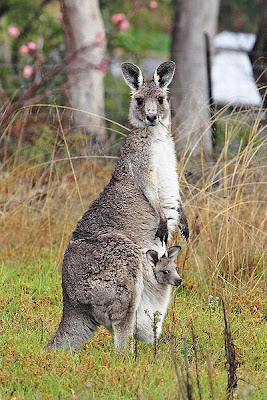 Eastern Grey and her Joey

My kangaroos are Eastern Greys. The largest is the Red kangaroo which can stand at 6-7 feet and weigh 200lb.

There are over 60 species of kangaroos, the smaller ones you may be familiar with are called wallabies.

The early explorers said of the kangaroo:

He lives 4-6 years and is a strict herbivore, many are nocturnal.

The huge tail has three functions: 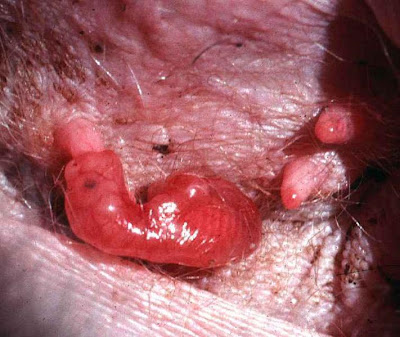 The kangaroo is a marsupial - the female has a pouch. The fascinating thing about marsupials is that the female has two lateral vaginas and a third birthing canal! The male has a two pronged penis which inseminates the female through the two vaginas which lead to two uteruses.
The female can be permanently pregnant, except the day she gives birth. The embryo develops for only 33 days before being born and making the great walk to the pouch - which actually only takes about three minutes.

The kangaroo baby is born blind, hairless and only a few cms long. His back limbs are just buds but his stronger front limbs allow him to climb through the furry abdomen of the mother up to the pouch where he latches on to one of the four teats and begins feeding. The mother can produce two different types of milk. One for a newborn and the other to suit a bouncing young joey. The young can inhabit the pouch together.


After 190 days the neonate has become a little joey and can leave the pouch.

And after 235 days Mother kicks him out for good! Farewell Skippy... 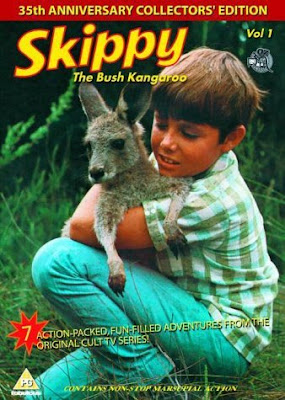 The Skippy TV series was made in Australia between 1966-1968. The segments were filmed in colour, to increase marketability, even though Australian TV was black and white until 1975.
The series aired in the US and was also dubbed into Spanish and shown in spanish speaking countries.


Oh, and that clicking noise that Skippy made: "thck,thck,thck" is not made by kangaroos.