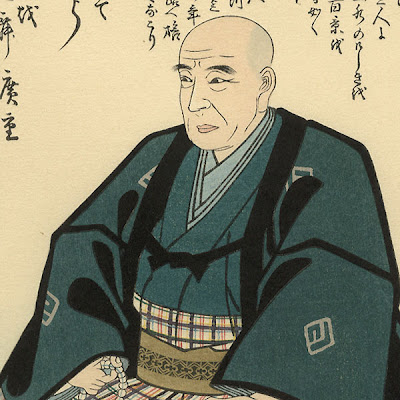 He describes himself thus:
Putting aside the moon and snow,
how delightful it is to live roundly
with a head more round
than a dumpling round and round!

Hiroshige was a man of strong features and a ruddy complexion. He was fond of his sake and loved fine dishes and this was evident in his portly appearance.


I learned about Hiroshige's work when I walking the Nakasendo Way as he is famous for his collections of landscape scenes along the Tokaido and Kiso Kaido Highways.
The Sixty Nine Stations of the Kiso Kaido feature many of the post towns on the Nakasendo walk.

Born into a low ranking Edo samurai family Hiroshige lived on the border between the samurai elite and the working class. His father was a fireman at the Edo castle and Hiroshige inherited this role at thirteen years of age when his father died.

Legend has it that Hiroshige decided to become a ukiyo-e artist when he saw the work of near contemporay Hokusai who published a famous set of prints called Thirty Six Views of Mt Fuji in 1832.

Hiroshige was fortunate to have been tutored in the Chinese influenced Kano school of painting by another fireman.

At age fifteen he was accepted, as per the practice, to be apprenticed to Utagawa Toyohiro, a notable Edo artist.

Owl on a Pine Branch

a kyoka by poet Hajintei

Hiroshige's early print making period concentrated on bijin - beautiful women, actors and historical figures. After which he made landscape prints of birds and flowers. This was followed by a period of landscapes featuring fashionably dressed women in the foreground and several series with historical and classical themes. He also made prints with humourous content and for practical purposes such as fans, envelopes, advertising, board games and book illustrations. 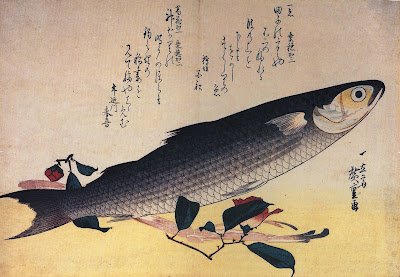 The kyoka on the right by Toshinomon Haruki


But what Hiroshige is possibly most remembered for are his numerous (over 4500) depictions of the landscapes and towns from his travels. He aimed for realistic representation throughout all seasons, and the works were immensely popular. It was a time when internal tourism was booming and guidebooks abounded. 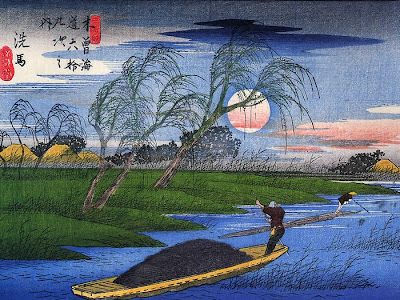 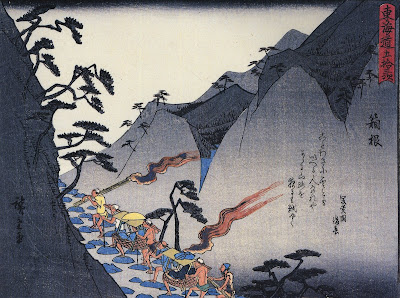 Hakone- Travellers on a Mountain Path at Night


As the saying goes, speaking of clouds,
it also happens to people -
just when one approaches a mountain path,
evening falls 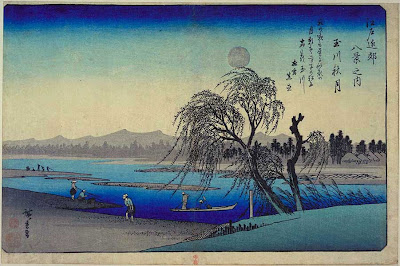 I have been looking so long
but didn't see it come out of the mountains
there it is, without any dust:
the moon over the Crystal River 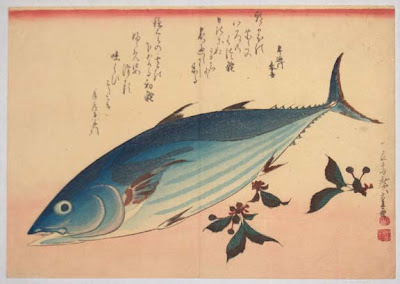 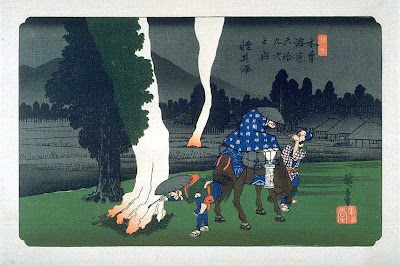 Karuizawa - from the series - The Sixty nine Stations of the Kisokaido

He also greatly influenced French Impressionists particularly Van Gogh and Monet.
So valued are Hiroshige's prints that history draws on his works to paint a picture of the Tokugawa - Edo period from 1600-1868. 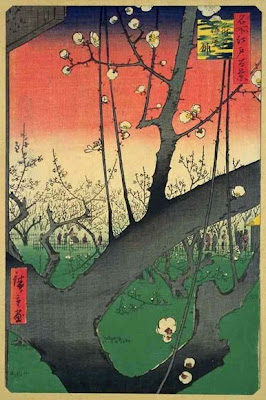 
Just before his death Hiroshige wrote:

The Western Land refers to the strip of land from Kyoto and Edo - the Tokaido but also serves as a double reference to the Paradise of Buddhist texts.

The Moon Seen through the Leaves


It is not so sad that maple leaves fall,
scattered on the moss-covered ground -
it is only sad when the wind gets chilly and rough,
and rain clouds darken the sky

Information sourced from Wikipedia,
and the book Hiroshige by Matthi Forrer,