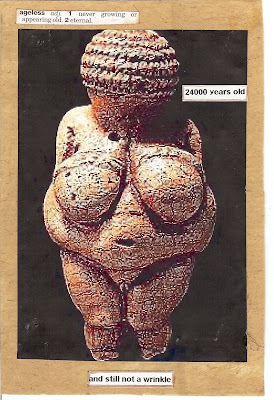 This Venus is dated to be about 24,000 years old but in fact she is ageless.

Standing only four and three eighths of an inch tall, (approximately the size of the image above) she is one of the most well known Venus statues. Found in 1908 in Willendof, Austria during the construction of the Wachau railway, Venus is a highly idealized portrayal of the female figure. Venus is carved from oolithic limestone and covered in an ochre wash. 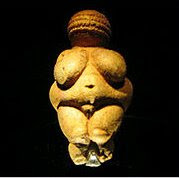 With no visible face, her tiny arms are folded over her breasts. Her head is covered in circular, horizontal bands of plaited hair or a type of headdress. Her feet don't stand by themselves so it is speculated that she was made to be held. At that miniature size she would nestle comfortably in the palm of your hand.

With her head and eyes cast downwards it is thought that Venus may be looking down at her own body. 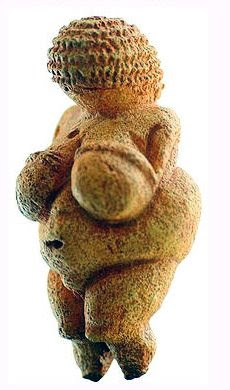 All of the Venus statues found share similar common characteristics which include:

If you are interested in learning more about Venus and the ice age period that she lived in I suggest that you go to this wonderfully informative site.

My information sourced from wikipedia.org