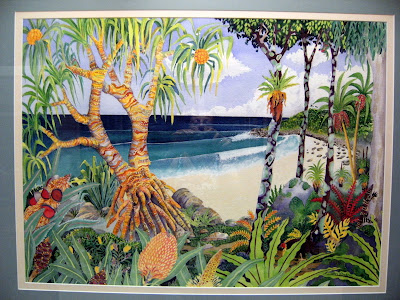 Our town of Noosa hosts a surfing festival each year. In its infancy we agreed to sponsor a group of Hawaiian surfing legends so they could attend the event. One of the surfers was accompanied by:- 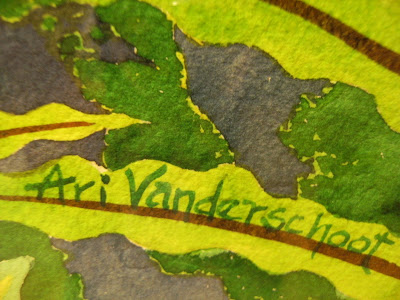 ~ who we found was a very accomplished artist. My husband commissioned Ari to paint a surprise birthday gift for his beloved, featuring some of the elements of Noosa that go to make it such a fabled coastal town.
If you come closer I'll point out some of those features: 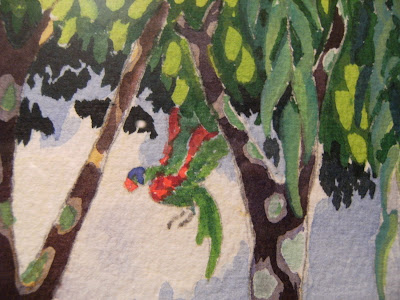 Up in the canopy of the forest between the first and second gum trees from the right, you can see a rainbow lorikeet which is just gliding in to land. The rainbow lorikeets are usually seen in groups which makes them even more spectacular. They make their nests in hollow eucapyptus trunks and forage on flower nectar and pollen as well as seeds, fruits and some insects. 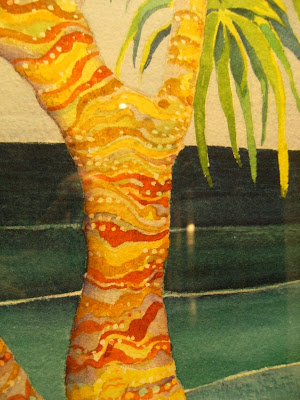 Ari has incorporated in the painting of the pandanus trunks the same dot technique that aboriginal artists use in their work. 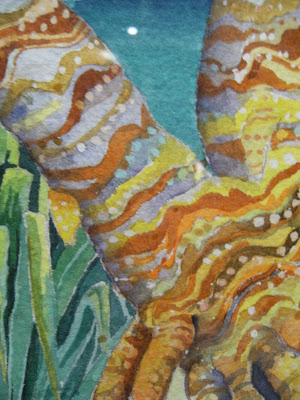 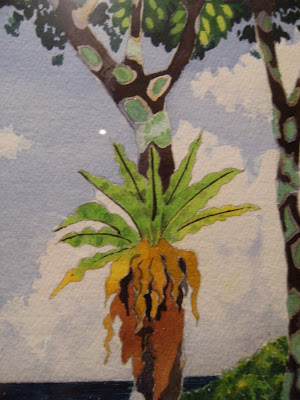 Attached to this gum tree is a bird's nest or crow's nest fern. The bird's nest is an epiphyte catching falling leaves and forest litter in its nest shape structure, which when rotted acts as a medium for its root system. 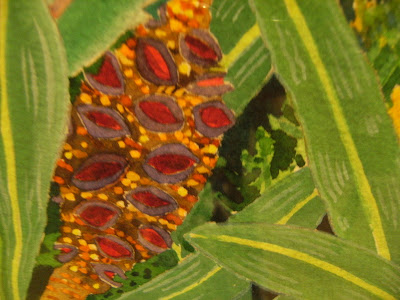 The follicles of the Banksia nuts burst open to release the banksia seeds. The nuts of some varieties are sought after for wood turning. 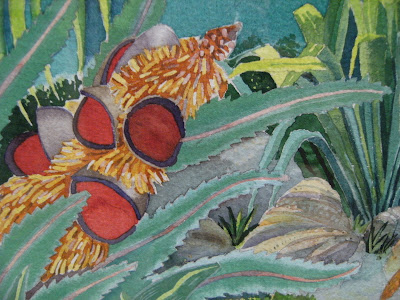 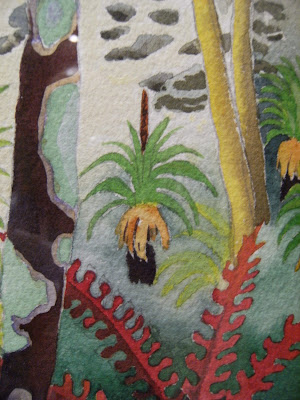 In the centre of this picture there is a black boy grass tree, Xanthorrheas, named after the aboriginal term balga which means black boy due to the similarity of the blackened appearance of the naked stump after a fire has gone though the bush, to that of a black child.
At the base of the grass stalks the aborigines found resin flakes which they heated and rolled into balls. When needed the resin would be reheated and used to glue stone flakes to wooden spear shafts or woomeras.
To start fire the aboriginies would rub the dry flower stalks together. They also made a beverage from the soaked flower stalks, and the tough seed pods of the black boy plant served as knives.
(In reality the stalks are grass like) 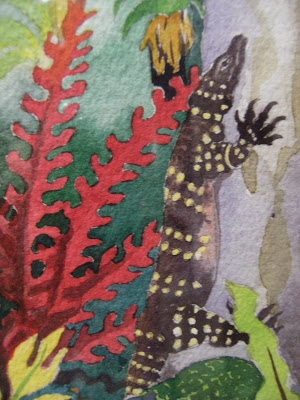 This beautiful specimen commonly called a goanna, is a lace monitor. He can grow over two metres in length and is a formidable character. He sports sharp claws and teeth and devours small creatures including rodents, turkeys, eggs, birds, mammals, snakes, and also carrion. He is both a predator and a scavenger. You don't want him too near your picnic table if it is unattended.
If threatened he will rear up and inflate the flaps around his throat to appear even more intimidating and emit a harsh hissing noise. If confronted by one I am always wary of the reports that they can run up your legs in a misguided attempt to escape.

Goannas feature widely in aboriginal artwork both as an item of their diet and as a symbolic spiritual motif. 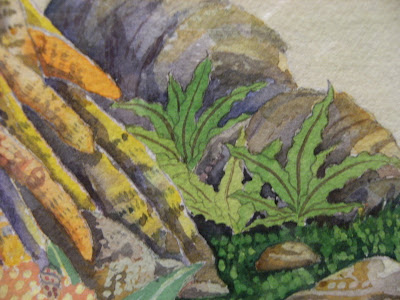 The pandanus tree has a distinctive root system like a tripod plus a few more legs. 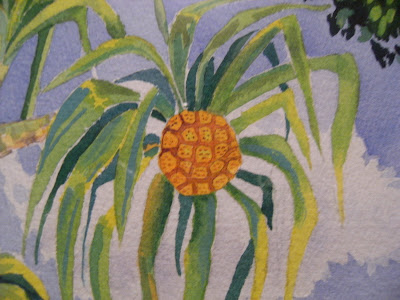 And it grows these large pineapple looking fruit which are edible for bats, rats, crabs and the goannas. The large pandanus leaves are woven into mats, hats, and baskets by numerous pacific island groups. 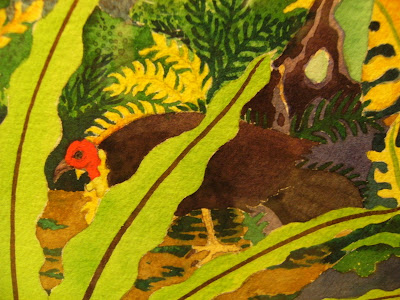 And here is our now famous, ( since my turkey blog), bush turkey foraging on the forest floor. 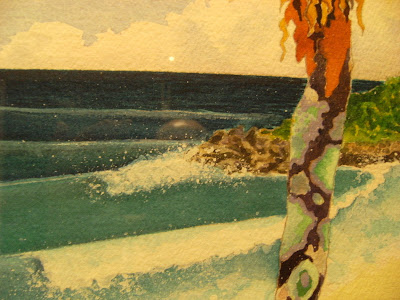 But one of the things that Noosa is particularly mytholigised for is it's surf breaks. This is Ti Tree Bay named after the ti trees, ( Melaleucas) that grow there which dye the streams a tea brown colour in the rains.

You can find more of Ari's tropical art at her website: http://www.mauiwebdesigns.com/ari/