Many moons ago when we were travelling through Mexico my husband decided to experience the thrill of para-sailing. After a brief introduction they harnessed him on to the tow rope and off he flew into the sky. See that little fly speck way up there under the parachute - that's him. 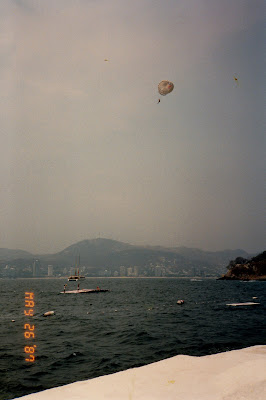 It was a gusty day and my husband is a slightly built man weighing less than me. On his return to earth this Icarus of mine had a spot of difficulty. The power boat towing his parachute completed its final circuit and slowed down as it passed over the floating pontoon that you can see out in the ocean with two attendants on board.

Instead of dropping gently from the sky and landing safely on the deck or in the arms of the waiting attendants, my husband stayed up in the sky buoyed by the blustery wind. The boat made another turn around the bay and passed over the pontoon again, but to no avail.
On the third circuit as he passed over home base one of the attendants was able to reach up and grab his ankles... And then they both took off.

The boat switched into reverse and did some fancy maneuvering until the second attendant was able to catch the first attendant who was dangling off my husband's legs and they all three fell into the sea. But Hallelujah he was down! 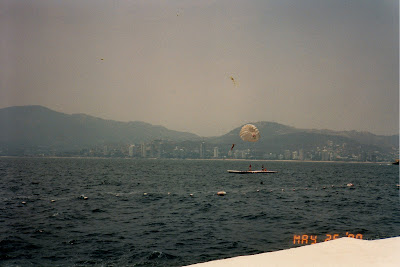 Here he is coming in to land, well then again maybe not...


I asked my husband if he was anxious during this ordeal. He replied, "No, they had obviously done it all before. "

Later I got to thinking about putting your trust in other people. Sometimes you have to trust someone else when you are in a tricky situation. Others times it may take two people to help you, or even a whole team of people.

These people have strategies and ideas that we may be unaware of. We can learn from them. They can help us and guide us. Sometimes we know we must have professional care or help and we seek it out. Other times we find it hard to ask for help and to put our trust in our friends.

And then there are the times when life just demands that we put our faith in others and trust that they can get us to a safe place.