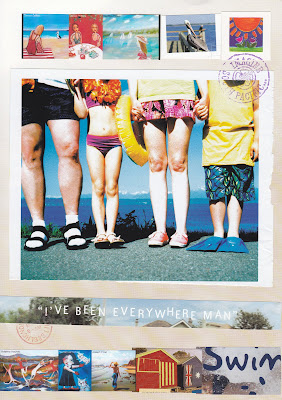 The song 'I've been everywhere Man' has been recorded by a great many artists in many different countries. As well as the original Australian version there is an American version which made #1 on the country music charts. It has been sung in America by, amongst others, Hank Snow and Johnny Cash. There is a British version and a New Zealand version - sung by John Hore. In addition there are many parodies. It has been brought to our attention again recently in Australia due to being featured in a Telstra (phone company) advertising campaign to promote their broadband service.

If you've forgotten all those place names it goes like this:

Well, I was humpin' my bluey on the dusty Oodnadatta road,
When along came a semi with a high and canvas-covered load.
(Spoken) "If you're goin' to Oodnadatta, mate, um, with me you can ride."
So I climbed in the cabin and I settled down inside.
He asked me if I'd seen a road with so much dust and sand, I said
"Listen, mate, I've travelled ev'ry road in this here land."

Chorus
(Spoken) "Yeah but listen here, mate, have you been to..."

(Spoken) "Okay, mate, you've been ev'ry place except one, and ya don't need my help t'get there."
(Sound of door slamming and truck driving off.)


* Maroochydore: Is a 30 minute drive from where I live. 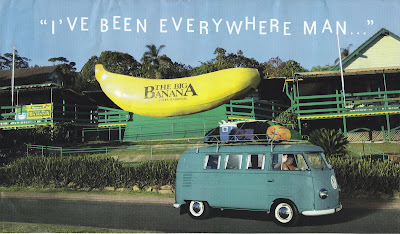 This is the image from the Telstra advert I mentioned and I've included it because of the Big Banana in the background. Refer to my posting 'From the Kitsch to the Sublime".
~