Basho - A Man of Few Words- 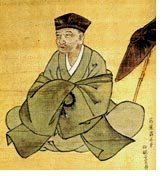 He is known as the first, great poet of haikai and haiku.


The title of my blog is taken from Basho's haiku called, The Entrance of Spring.


The scene is almost set for spring to come

A hazy moon and blossoms on the plum.

What do we know of the gifted poet?


Basho was introduced to poetry at a young age. Born to a low ranking samurai/farming family he became a servant to the local Lord, Todo Yoshitada, who shared with Basho a love for haikai no renga.


Haikai no renga is a collaborative form of poetry writing where two or more poets alternate writing the stanzas. The hokku or introductory stanza conforms to the 5 - 7 - 5 syllable pattern that we are familiar with in composing haiku.


The End of Autumn


At evening on a withered bough

A solitary crow is sitting now

When Basho was aged twenty two the Lord Yoshitada died suddenly and Basho decided at that juncture to leave home. He continued writing and publishing his work and moved first to Kyoto and then on to Edo, present day Tokyo, to further his studies in poetry, philosophy and calligraphy.

Basho took the pen name of Tosei and quickly progressed in his studies becoming a teacher with a group of disciples.

Fishes' eyes are filled with tears

Throughout his lifetime Basho fluctuated between enjoying the company and camaraderie of others and the limelight that fame brought and his need for quiet and privacy.

At one time he became reclusive and his disciples in Edo built him a small rustic hut. Alongside the hut they planted a banana palm. Basho adopted the word for banana, basho, as his new haigo, (writing pseudonym).


A banana plant in the autumn gale

I listen to the dripping

Into a basin at night

Basho became interested in Zen meditation but continued to feel lonely and dis-spirited even though he had achieved his goals: - respect as a poet and material comfort.


In 1684 at the age of forty he left Edo on the first of four major wanderings.

Initially he was very anxious on the road as travel in medieval Japan was very dangerous, but he met many friends and supporters. He called his journey - the journey of a weather beaten skeleton, thinking that if he should be the recipient of ill fortune his body would weather away to dust along the roadside.


Travelling gave Basho a new lease on life. He grew to enjoy the changing scenery and the seasons. We can hear that he is relaxing into travelling in the following haiku:

Another year is gone

A travel hat on my head

Straw sandals on my feet


Basho writes in a dramatic manner exaggerating the expressions of humour, depression, ecstasy or confusion. He likes to draw attention to the smallness of human existence compared to the greatness of nature's power. In his writings Basho aims to reflect his real environment and his emotions. We see that he has a quirky wit coupled with a colourful imagination.

In 1686 he wrote what has become his most remembered haiku.

a frog jumps in

the splash of water

On his journeys he wrote haibun - prose and poetry travelogues - The Narrow Road to the Interior, being his most well known. His numerous journeys garnered many images to inspire contemplative poetry. He said that the Gods of travel beckoned him.

from deep within the peony

As Basho's fame was widespread he was treated with courtesy and generosity wherever he went in Japan. With fame came many friends and well wishers and at times Basho found his time was no longer his own. Some of his most enjoyable times were those he spent in out of the way huts where he could write and meditate alone without intrusion.

Back home in Edo he decided one time to lock his gate to all guests.

in the day time , a bolt is fastened

on the front yard gate.

A month later he faced the world with a new perspective of lightness, feeling that while he belonged to the mundane world he could remain detached and stand apart as a spiritual by- stander.

His verses and collections and anthologies from that time take a calm carefree attitude to the things of daily life, often exuding lightheartedness.On his last journey he looked forward to travelling as a self disciplining monk rather than as a renowned poet.

As Basho's health faded he continued to write excellent verses.

Why am I aging so

Flying toward the clouds, a bird


The following is claimed to be his final recorded haiku.

Falling sick on a journey

over a field of dried grass

Basho died of a stomach illness on his final journey, in 1694.


Winter Days is one of Basho's renga or co-operative poems. It has 36 stanzas shared by Basho and five other poets. Basho was given the honour of writing the hokku or the first introductory stanza and six other stanzas. The hokku of these renga often became a stand alone poem , known as a haiku.


In 2003 director Kihachiro Kawamoto selected 35 animators to develop a movie based on Basho's renga of the same name.


If you click below you will see a beautifully animated minute movie of Basho's haiku. I like to think that the likable old character with the straw hat is Matsuo Basho off on another journey.

My sources for this story include:
History of Haiku www.big.or.jp/~lpoupe/links/ehosto/ebasho.shtml
Narrow Road to the Deep North by Makto Ueda www.uorego.edu/~kohl/basho/life.html
Wikipedia.org/wiki/matsuo_Basho