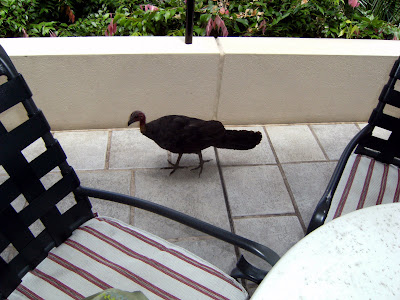 This turkey came a visiting while my friend and I were having our after gym coffee. We call him a Bush Turkey but his real name is either a Scrub or Brush Turkey. 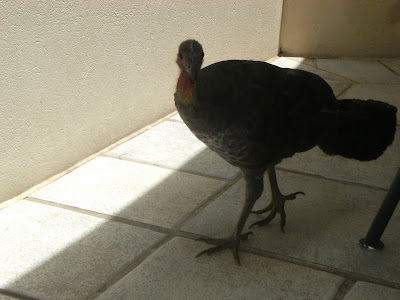 He is a spectacular creature with browny black plumage, a wide, flat, fan tail, a bald red head and a yellow wattle. 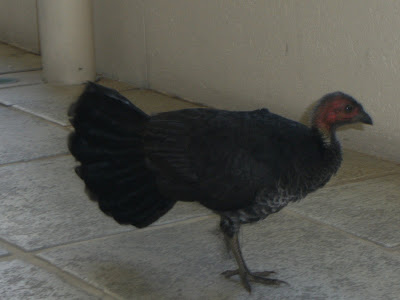 At breeding time the male's head and wattle brighten and the wattle enlarges. I think this visitor is a youngster. ( I took his photo the next day - see how he doesn't yet have a yellow wattle - or maybe he is a young she.)
The turkey is a clumsy noisy flyer, roosting in the trees at night or in the heat of day but we usually see him strutting along at ground level. 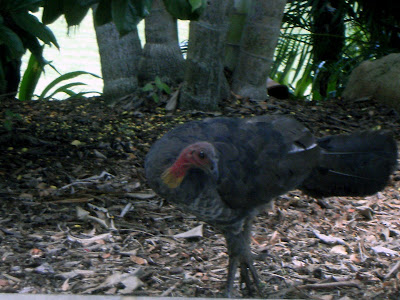 Turkeys are very common in our town and while twenty years ago it was thought that they may become extinct ,their numbers are now increasing.
Turkeys are communal birds, making communal nests. The nests are large mounds of leaves, mulch and earth stretching 1 to 1.5 m high and up to 4 m across. 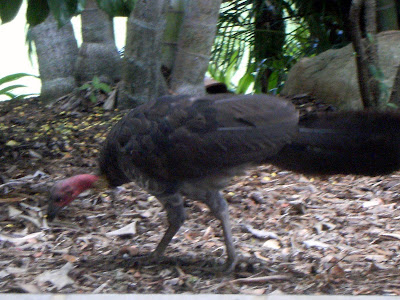 The eggs hatch under Dad's care in the heat of the nest. Dad checks the temperature by poking his beak into the nest then adds or removes vegetation in order to maintain a 33-35 * C incubation temperature range. If the nest gets too cool more males will hatch and conversely if it's too hot more females will arrive. So it would be quite correct to call them 'Hot chicks' . The same breeding site is used year after year and the average clutch is between 16 and 24 large white eggs. 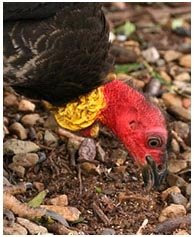 The world of Brush Turkey experts is excitedly buzzing at present due to the sighting here in town, of a 'gold' chick with fluffy golden down. The rare gold chick appears to be the offspring of an equally rare creature - an albino mother. It surprises the experts that the albino mother has survived to adulthood for two reasons. Firstly because 90% of chicks just don't make it and secondly, because being white the albino would be very conspicuous against the vegetation and earth of her habitat and therefore be more easily spotted by predators including the hawk.

This little chick, if she survives will become as white as her mother. Good luck Goldie!