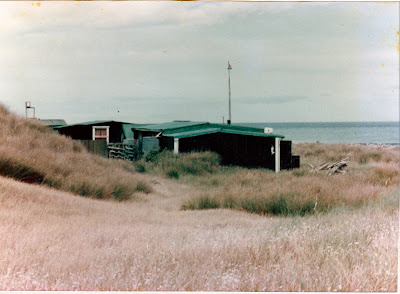 On a patch of windswept, barren, inhospitable East coast of New Zealand my husband’s family have this bach* which is called ‘The Whareama” - (pronounce that ‘wh’ with a ‘ph’), - after the river which provides the only access to the coast other than a 4 wheel drive over bumpy sheep tracks.


* Bach, pronounced batch, is a modest seaside weekender or holiday home usually made from cheap or recycled materials. Early post war baches lacked modern amenities of electricity, running water and indoor toilets. They were furnished very simply with second hand furniture.
In this case the bach is made from car packing cases used in the importation of tractors and cars to New Zealand in the 1950s. 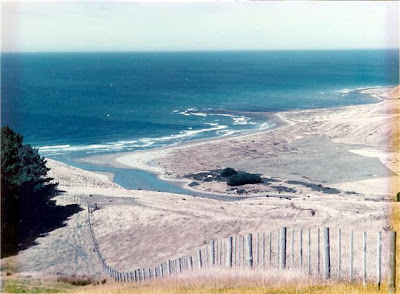 The Whareama River mouth can be a place of desolate isolation or a place of rugged, untamed beauty depending on the weather and the viewer’s prevailing mind-frame. The family's bach is on the left hand side of the river mouth - not visible here in this rather faded snap shot. 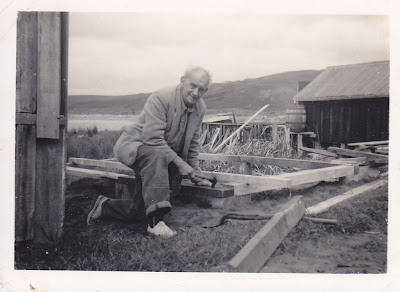 My husband’s grandfather, Edwin Boyd-Wilson was a professor of French at the University of Victoria, Wellington where he was beloved by his students for his abundant energy and enthusiasm.
He was a passionate gardener, builder, footballer, hunter and tramper.

In his old age nothing gave him more joy than to find a piece of totara amongst the endless piles of driftwood on the shoreline of the Whareama.
Totara, a native timber, is a long-burning firewood suitable for fuel for the coal range, which provided heat for cooking, warmth and generated hot water.

Grandfather left his mark at the Whareama in his contribution to the bach and its various additions or annexes, but more memorably in the passage that he wrote over the lintel of the doorway, inside the bach’s living area.


Which translated means: “Do whatever (you) want.”

But in the spirit of the writer’s intentions and in more contemporary parlance it can be read as – to borrow a phrase of Joseph Campbell: