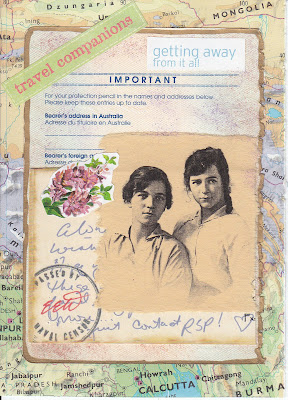 The travel companions in my postcard above are, on the right my paternal grandmother born Mabel Fielding, in Canterbury New Zealand, and on the left, her sister Hilda.

As I made this card I tried to imagine how in the 1920s they may have wondered about the possible trajectory of their lives.

My grandmother married at 16 years of age and had her first son within a year. He became an air force navigator and was to die as a very young man in his first mission in the Pacific.

My grandmother was tiny in stature - barely five foot tall but she had a towering presence. She changed her Chrisitian name by deed poll from Mabel to the more modern Ann.


Ann Newlands became a Labour party stalwart and the mayor of the town of Timau. In 1948 she accompanied Peter Fraser, the Labour Prime Minister, to Paris for three months for the final round of negotiations on the Geneva Draft of the Universal Declaration of Human Rights at the United Nations General Assembly.
At the time she was President of the Women's Section of the NZ Labour Party and a member of the Labour Party Executive Commission. 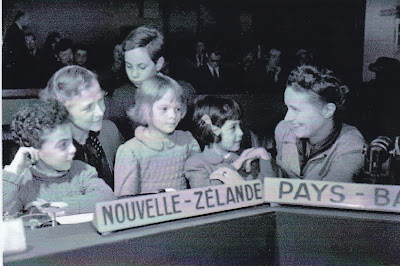 At UNGA with the delegate from the Netherlands explaining the UNHR to young visitors.

Ann's task was to present New Zealand's views and beliefs to the UNGA. New Zealand's position was not typical of other Western nations. A major issue of dissension in the Geneva Draft was the significance of civil and political rights (strongly promoted by the West) and economic, cultural and social rights (advocated by the Eastern Bloc countries)
New Zealand's stance was that the government had a specific responsibility to promote economic cultural and social rights because civil and political rights were incomplete without them.

The New Zealand delegation stated it this way:


"Experience in New Zealand has taught us that the assertion of the right of personal freedom is incomplete unless it is related to the social and economic rights of the common man. There can be no difference of opinion as to the tyranny of privation and want. There is no dictator more terrible than hunger."


My grandmother had an enormous zest for life , a great love of the country side, her family and the needs of the community. She was also a consummate story teller. She loved the thrill of a game of cards or a flutter on the horses and she was very partial to MacIntoshes toffees.
When I was a teenager she taught me how to knee a boy in the groin if he was to become 'fresh'!


My grandmother was a powerful feminist role model in my life way before I had ever heard of that term. In my childhood autograph book she wrote these words which succinctly encapsulate the essence of her character and the way she lived her life. 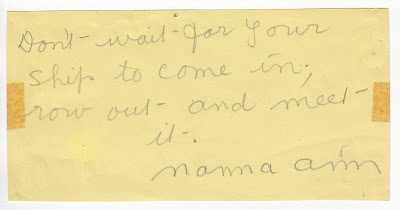