The Summer of Singing Cicadas 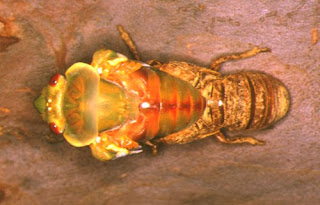 The raucous concerted choirs of cicadas is a well known summer event in both Australia and NewZealand. In the daytime the busy hum floats across the river from the gums and paper bar trees on the bank opposite my house.
The Qld Museum has an interesting cicada site where I found these pictures and some astonishing facts. Like the Green Grocer cicada being the loudest insect in the world and at 120 dB which is approaching the pain threshold of the human ear, is as noisy as a jet taking off at a distance of 100m.
This picture above is the green grocer emerging from his shell. Cicadas can spend from 9 months to 17 years underground in the nymph stage of their lifecycle. No wonder they want to sing when they claw their way out and emerge! 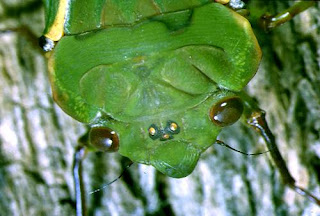 The males make all the noise; to ward off birds in the daytime and to call the ladies at night and then to serenade them. The sound comes from organs called tymbals in the insect's abdomen. 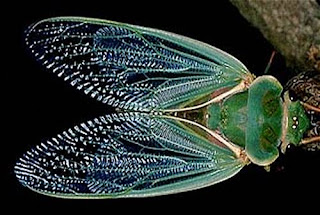 The Green Grocer dries his wings on emerging. Worldwide there are over 2000 species of cicadas, in Aus 200 have been identified.
The ancient Greeks saw the cicada as a symbol of resurrection, rebirth and immortality. The Greeks and Chinese have both kept cicadas in jars for the pleasure of hearing them sing.
In Taoism the cicada represents the Soul disengaging itself from the body at death. 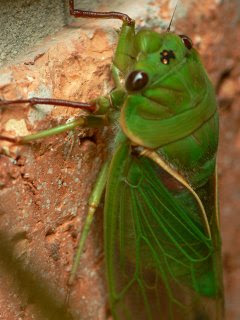 What appeals to me most of all is the colourful names that the Australian cicadas have. There is the Green Grocer above, the Floury Baker, the Black Prince, the Double Drummer, Cherry nose, Chocolate Soldiers, Brown Bunyip, Blue Moons, Masked Devils, the Razor grinder and the Yellow Monday.

The ABC article is called 'The Summer of Singing Cicadas' at www://abc.net.au/science/scribblygum/February2001