Much more than a colourful truck...

*
When I went for a walk
in the National park yesterday
I noticed this colourful truck in the car park. 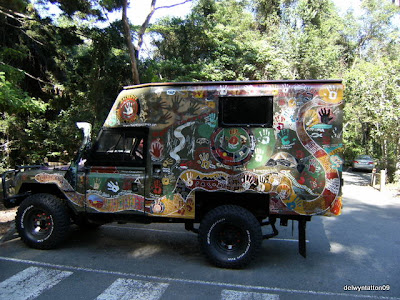 On closer inspection it appears to be: 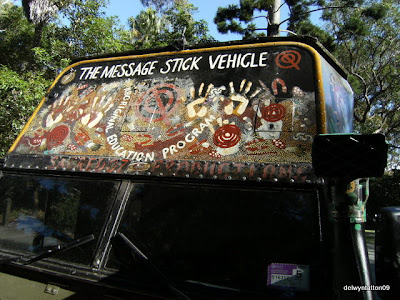 
I took some shots of it thinking that it would be
a good talking point and open a discussion on
Aboriginal myths and folklore. 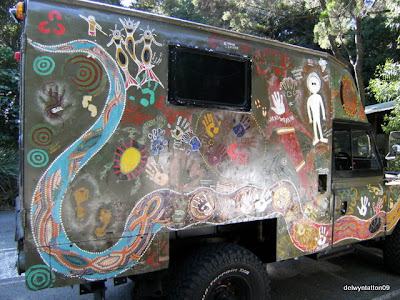 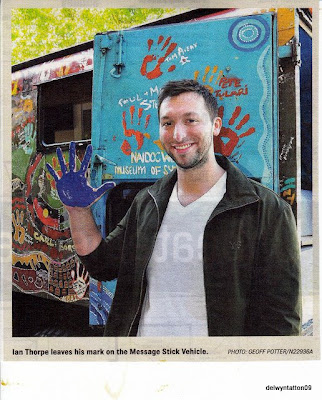 But when I opened this morning's local paper
I found a picture of Ian Thorpe -
he of big feet and Olympic swimming records,
adding his hand print to the truck.

I learned that Ian was in Noosa to give support
to a fund raising event to aid Aboriginal communities
and others in South Africa.

Ian Thorpe's Foundation for Youth
is a charitable organization started in 2000,
which seeks to help alleviate poverty
in Aboriginal communities. 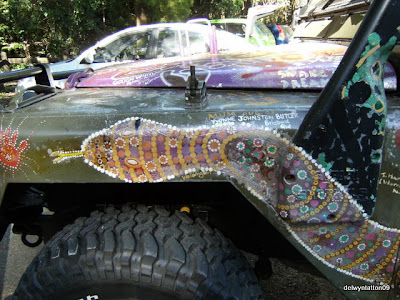 This truck is used by a small group of people
to visit aboriginal communities
to learn of the indigenous culture,
to foster the preservation of that rich cultural history
and to build bridges 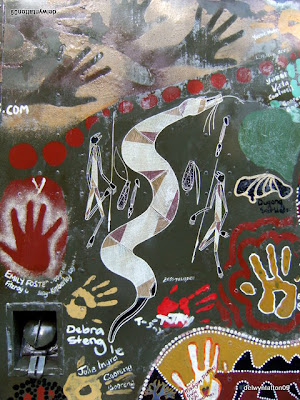 for every year of education you add to an Aboriginal mother,
you add four years to the life expectancy of her child.

Many of the health problems in the indigenous
population can be attributed to lack of nutrition
and education. 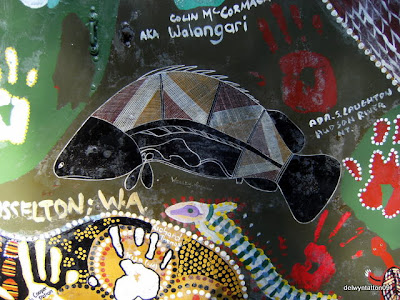 The large snake on the side of the truck
in the photo above is the mythical Rainbow Snake.
A snake of enormous size he lives at the bottom of the deepest
water holes. He is descended from the dark streak in the
milky way and reveals himself as a rainbow as he moves
through water and rain. 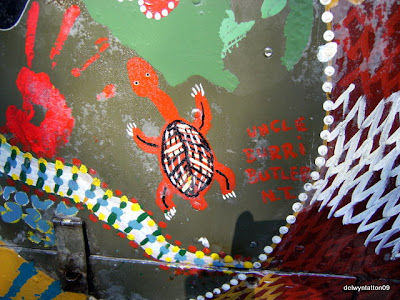 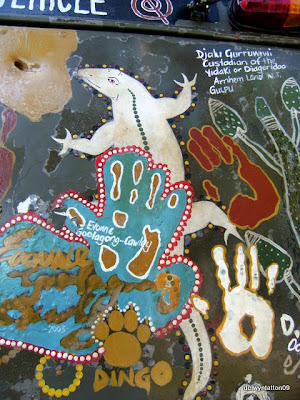 A relative of Murray adorns this section of the truck.
Above the dingo footprint is
Evonne Goolagong Cawley's name. 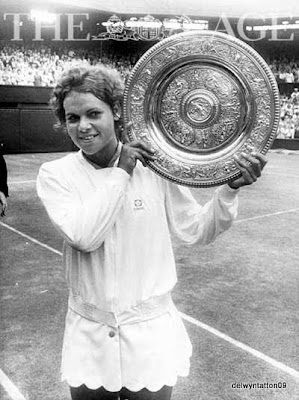 Evonne Goolagong, an indigenous Australian
was a world #1 tennis player winning Wimbledon,
four Australian Opens and
one French Open, in the 1970s and 80s.
She is now an advocate for Aboriginal youth
and runs tennis camps in my area. 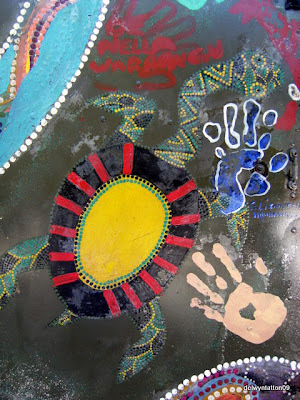 In one Aboriginal story Bingingerra, a giant
fresh water turtle,
was chosen to lead the land creatures in battle
against the sea creatures. 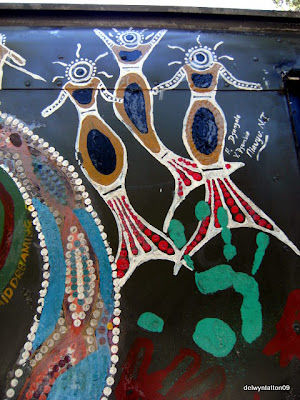 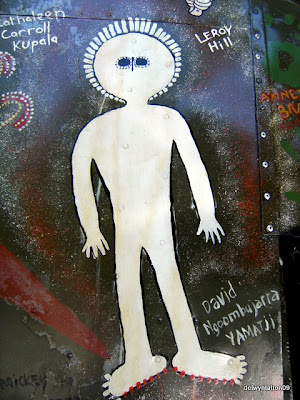 The Wandjina are rain and cloud spirits
in Aboriginal mythology.
The spirits are depicted in rock paintings
in human form but without mouths.
It is said that if the spirits were to have mouths
the rain would never cease.

The Wandjina made the sea, the earth and
all of their inhabitants.
If offended these spirits can cause lightning
and flooding.
Their special powers are depicted in the feathers
and lightning shown around their heads. 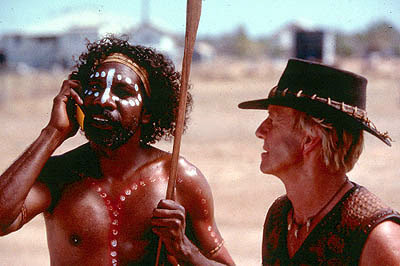 
I have since learned about The Message Stick Vehicle from

In the words of the film makers:

This extraordinary journey began in a 1961 Ex-Army Ambulance dubbed ‘The Message Stick’ that was first built for WAR, now rebuilt for PEACE.
After 10 years in the harsh third world communities in the Australian Outback, Michael Butler, Samantha Martin and Michelle White discover their own awareness in promoting the positive aspects of Aboriginal Australia.


They drove out of Sydney heading North with only $300 dollars in their pockets, a digital camera and a passion to learn about the Aboriginal cultures.
‘The Message Stick’ 4WD vehicle became their home and production vehicle, giving them access into the remote communities in the outback.

The vehicle is re-enacting a 50,000 year-old story of traditional message sticks that traveled around Australia on foot by young Aboriginal warriors, this form of communication was used to pass on important news and messages to different language groups. It identifies the bearer and welcomes them on strange land, but instead of a stick this modern day motorized Message Stick vehicle becomes the canvas for Peace and Reconciliation around the World sharing and gathering important messages of the preservation of an Ancient culture.

~
The painted truck that I noticed in the car park
is certainly much more than just a colourful truck.

It is an emissary of hope.


Welcome to my Stories